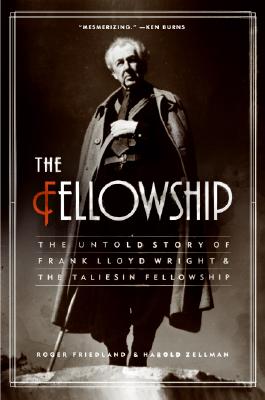 Frank Lloyd Wright was renowned during his life not only as an architectural genius but also as a subject of controversy—from his radical design innovations to his turbulent private life, including a notorious mass murder that occurred at his Wisconsin estate, Taliesin, in 1914. But the estate also gave rise to one of the most fascinating and provocative experiments in American cultural history: the Taliesin Fellowship, an extraordinary architectural colony where Wright trained hundreds of devoted apprentices and where all of his late masterpieces—Fallingwater, Johnson Wax, the Guggenheim Museum—were born.

Drawing on hundreds of new and unpublished interviews and countless unseen documents from the Wright archives, The Fellowship is an unforgettable story of genius and ego, sex and violence, mysticism and utopianism. Epic in scope yet intimate in its detail, it is a stunning true account of how an idealistic community devolved into a kind of fiefdom where young apprentices were both inspired and manipulated, often at a staggering personal cost, by the architect and his imperious wife, Olgivanna Hinzenberg, along with her spiritual master, the legendary Greek-Armenian mystic Georgi Gurdjieff. A magisterial work of biography, it will forever change how we think about Frank Lloyd Wright and his world.

Roger Friedland is a cultural sociologist who studies love, sex, and God. Professor of Religious Studies and Sociology at the University of California, Santa Barbara, and New York University, he is also the coauthor of The Fellowship: The Untold Story of Frank Lloyd Wright and the Taliesin Fellowship (with Harold Zellman). He lives with his wife in Santa Barbara, California.

“[A] blockbuster…packed [with] plenty of sex and surprises. …This book has a lot of news.” — Capital Times

“A mesmerizing account of the drama that compelled the great architect…to greater accomplishments…and the cost of that success.” — Ken Burns, award-winning director of The Civil War, Jazz, and Frank Lloyd Wright

“Sheds light on the forgotten men and women who played so important a role in bringing…[Wright’s] conceptions to reality.” — Franklin Toker, author of Fallingwater Rising

“An extraordinary and disquieting tale...that captures the strange, shadowy and all-too-human world that can gather around genius.” — Mark Stevens, Pulitzer Prize-winning author of de Kooning

“First to treat the Taliesin Fellowship as a whole — its origin, its workings and its inner life.” — Wall Street Journal

“Just when you thought there was nothing new to be learned about the great American architect Frank Lloyd Wright, a massive, gossipy and yet compulsively readable new book proves you wrong. . . .Friedland and Zellman break new ground with dozens of firsthand interviews that illuminate the crucial role of the apprentices—and of his regl last wife, Olgivanna—in shaping the second half of the architect’s storied and controversial career.” — Chicago Sun-Times