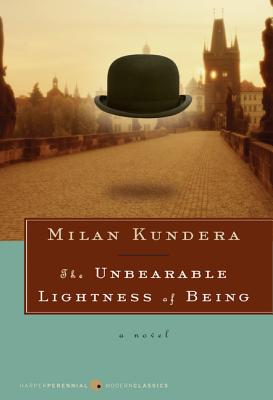 In The Unbearable Lightness of Being, Milan Kundera tells the story of two couples, a young woman in love with a man torn between his love for her and his incorrigible womanizing, and one of his mistresses and her humbly faithful lover. In a world in which lives are shaped by irrevocable choices and by fortuitous events, a world in which everything occurs but once, existence seems to lose its substance, its weight. Hence, we feel "the unbearable lightness of being" not only as the consequence of our pristine actions but also in the public sphere, and the two inevitably intertwine.

This magnificent novel, now available in a beautifully designed Harper Perennial Deluxe Edition, is a story of passion and politics, infidelity and ideas, and encompasses the extremes of comedy and tragedy, illuminating all aspects of human existence.

Milan Kundera is the author of the novels The Joke, Farewell Waltz, Life Is Elsewhere, The Book of Laughter and Forgetting, The Unbearable Lightness of Being, and Immortality, and the short-story collection Laughable Loves—all originally written in Czech. His most recent novels Slowness, Identity, and Ignorance, as well as his nonfiction works The Art of the Novel, Testaments Betrayed, The Curtain, and Encounter, were originally written in French.