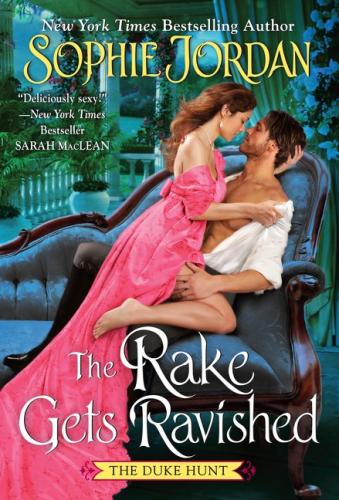 This is book number 2 in the Duke Hunt series.

New York Times bestselling author Sophie Jordan returns with an all new sizzling historical romance in her Duke Hunt series about a woman determined to reclaim her family home from the dangerously handsome owner of London’s most popular gaming hell.

The owner of London’s most popular gaming hell, wealthy and powerful Silas Masters, is feared by men and desired by women—except Mercy Kittinger. When the blackguard wins her family home in a game of cards, Mercy steals into Silas’s rooms, intent on destroying the proof. But things don’t go to plan…

She would have her way with him...

Caught in the act, Mercy must be bold to save herself...even if it means seducing the dangerous rogue and then disappearing with the dawn, debt voucher in hand. Safe at home and determined to settle back into her quiet, uneventful life, Mercy burns at the memory of her night spent ravishing the most compelling man she’d ever met. Thank goodness she’ll never see him again!

He didn't see her coming...

No one trifles with Silas Masters. Even if he could forget the dark-haired seductress who undid him, he can’t allow anyone to steal from him. He will hunt down the sultry woman who haunts his dreams and show her just how sweet payback can be.

Sophie Jordan grew up in the Texas hill country where she wove fantasies of dragons, warriors, and princesses. A former high school English teacher, she’s the New York Times, USA Today, and international bestselling author of more than thirty novels. She now lives in Houston with her family. When she’s not writing, she spends her time overloading on caffeine (lattes preferred), talking plotlines with anyone who will listen (including her kids), and cramming her DVR with anything that has a happily ever after.

“A powerful aphrodisiac upends a battle of wills between a taciturn colonel and a prickly herbalist . . . Interesting premise and likable characters shine.”  — Kirkus Reviews on The Duke Effect

“With Alyse, Jordan crafts a fiery, lovable heroine who craves more affection and opportunity than life has given her. The author matches fire with fire... The bedroom scenes are Jordan’s forte, with the overwhelming desire of the characters blazing off the page.” — Entertainment Weekly on The Duke’s Stolen Bride

“Depravity is no match for true love in this sweet and steamy read.” — Kirkus Reviews on The Duke’s Stolen Bride