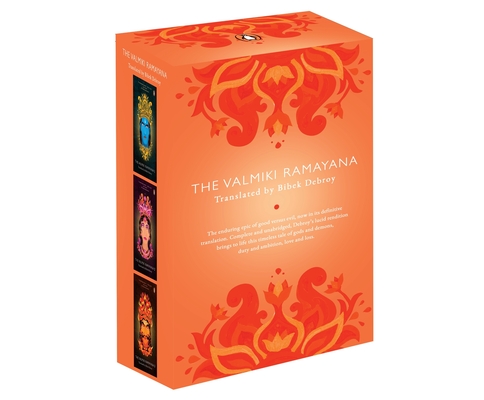 The Valmiki Ramayana remains a living force in the lives of the Indian people. A timeless epic, it recounts the legend of the noble prince Rama and his battle to vanquish the demon king Ravana.

Even before he is crowned king of Ayodhya, Rama is exiled to the Dandaka forests where he is accompanied by his beauteous wife Sita and loyal brother Lakshmana. Deep in the jungle, Sita is abducted by Ravana and taken to his island kingdom Lanka, setting into motion a dramatic chain of events that culminates in an epoch-defining war. Filled with adventure and spectacle, the Ramayana is also the poignant story of a family caught up in the conflict between personal duty and individual desires.

In Bibek Debroy's majestic new translation, the complete and unabridged text of the Critical Edition of this beloved epic can now be relished by a new generation of readers.

Bibek Debroy is a renowned economist, scholar and translator. He has worked in universities, research institutes, industry and for the government. He has widely published books, papers and articles on economics. As a translator, he is best known for his rendition of the Mahabharata in ten volumes, the Bhagavad Gita, the Harivamsha, and the Valmiki Ramayana in three volumes, published to wide acclaim by Penguin Classics. He is also the author of Sarama and Her Children, which combines his interest in Hinduism with his love for dogs.