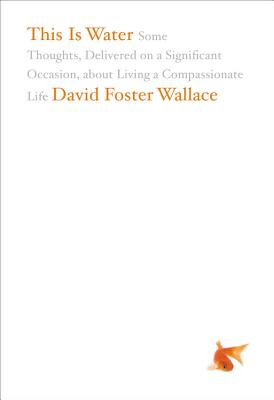 In this rare peak into the personal life of the author of numerous bestselling novels, gain an understanding of David Foster Wallace and how he became the man that he was.
Only once did David Foster Wallace give a public talk on his views on life, during a commencement address given in 2005 at Kenyon College. The speech is reprinted for the first time in book form in This is Water. How does one keep from going through their comfortable, prosperous adult life unconsciously? How do we get ourselves out of the foreground of our thoughts and achieve compassion? The speech captures Wallace's electric intellect as well as his grace in attention to others. After his death, it became a treasured piece of writing reprinted in The Wall Street Journal and the London Times, commented on endlessly in blogs, and emailed from friend to friend.

Writing with his one-of-a-kind blend of causal humor, exacting intellect, and practical philosophy, David Foster Wallace probes the challenges of daily living and offers advice that renews us with every reading.

David Foster Wallace was born in Ithaca, New York, in 1962 and raised in Illinois, where he was a regionally ranked junior tennis player. He received bachelor of arts degrees in philosophy and English from Amherst College and wrote what would become his first novel, The Broom of the System, as his senior English thesis. He received a masters of fine arts from University of Arizona in 1987 and briefly pursued graduate work in philosophy at Harvard University. His second novel, Infinite Jest, was published in 1996.

Wallace taught creative writing at Emerson College, Illinois State University, and Pomona College, and published the story collections Girl with Curious Hair, Brief Interviews with Hideous Men, Oblivion, the essay collections A Supposedly Fun Thing I'll Never Do Again, and Consider the Lobster. He was awarded the MacArthur Fellowship, a Lannan Literary Award, and a Whiting Writers' Award, and was appointed to the Usage Panel for The American Heritage Dictionary of the English Language. He died in 2008. His last novel, The Pale King, was published in 2011.

"We read Wallace because he forces us to think. He makes us consider what's beneath us and around us--like water."—Alicia J. Rouverol, The Christian Science Monitor

"Think of it as The Last Lecture for intellectuals."—Time

"None of the cloudlessly sane and true things he had to say about life in 2005 are any less sane or true today...[This is Water] reminds us of [Wallace's] strength and goodness and decency--the parts of him the terrible master [the mind] could never defeat, and never will."—Tom Bissel, New York Times Book Review