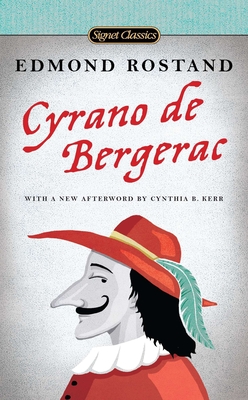 By Edmond Rostand, Lowell Bair (Translated by), Eteel Lawson (Introduction by), Cynthia B. Kerr (Afterword by)
$5.95

Regarded as one of the greatest dramas ever written, Cyrano de Bergerac is the story of the silver-tongued soldier whose unfortunate looks drive him to woo his love by speaking for his handsome but dull-witted rival.

Cyrano de Bergerac occupies a unique place in the modern theater. Deliberately disavowing realism and contemporary relevance, Edmond Rostand’s masterpiece represents a turning back in both time and spirit to an earlier age of high adventure and soaring idealism. Its magnificent hero, Cyrano—noble of soul and grotesque in appearance, gallant Gascon soldier, brilliant wit, and timid lover, alternately comic, heroic, tragic—represents one of the most challenging of all acting roles in its complexity and mercurial changes of mood. From its original production to the present day, Cyrano de Bergerac has enjoyed a charmed existence on the stage, its unflagging pace of action and eloquence of language enchanting critics and public alike. Here, in a superlative translation, is the ultimate triumph of the great French romantic tradition—a work which, in the words of the French critic Lemaître, “prolongs, unites and blends…three centuries of comic fantasy and moral grace.”

Translated by Lowell Bair
With an Introduction by Eteel Lawson
and an Afterword by Cynthia B. Kerr

Edmond Rostand (1868-1918) was born in Marseilles, France, in 1868, the son of a distinguished and cultured family. The young Rostand was educated first in Marseilles, then in Paris, where he earned a degree in law. It was a profession, however, that he was never to practice. He made his literary debut in 1890 with a volume of lyric verse, and his first important play, The Romancers, was produced by the Comédie Francaise in 1894. In 1897, Cyrano de Bergerac won critical acclaim and spectacular popular success, and Rostand further solidified his position as the foremost of modern French romantic dramatists with L’Aiglon in 1900 and Chantecler in 1910.

Eteel Lawson was educated in France and holds two Masters’ degrees, in International Relations and Economics. The author of a children’s book and a collection of short stories, she worked for the United Nations in Paris and now lives on the French Riviera.

Professor of French and Francophone Studies at Vassar College, Cynthia B. Kerr earned a Ph.D. in French and Humanities from Stanford University. Specializing in performance studies and Early Modern France, she has published three books, including Corneille à l'affiche: vingt ans de créations théâtrales, 1980-2000. She is the author of more than eighty articles and book reviews published in journals in Europe and the United States. She regularly writes for Choice, the publication of the American Library Association.