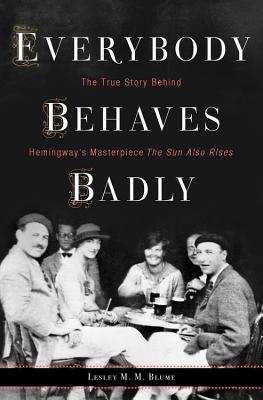 By Lesley M. M. Blume
Email orders@greenlightbookstore.com for information about this item.
Out of Print / Unavailable

The making of Ernest Hemingway's The Sun Also Rises, the outsize personalities who inspired it, and the vast changes it wrought on the literary world

In the summer of 1925, Ernest Hemingway and a clique of raucous companions traveled to Pamplona, Spain, for the town’s infamous running of the bulls. Then, over the next six weeks, he channeled that trip’s maelstrom of drunken brawls, sexual rivalry, midnight betrayals, and midday hangovers into his groundbreaking novel The Sun Also Rises. This revolutionary work redefined modern literature as much as it did his peers, who would forever after be called the Lost Generation. But the full story of Hemingway’s legendary rise has remained untold until now.  Lesley Blume resurrects the explosive, restless landscape of 1920s Paris and Spain and reveals how Hemingway helped create his own legend. He made himself into a death-courting, bull-fighting aficionado; a hard-drinking, short-fused literary genius; and an expatriate bon vivant. Blume’s vivid account reveals the inner circle of the Lost Generation as we have never seen it before, and shows how it still influences what we read and how we think about youth, sex, love, and excess.

LESLEY M. M. BLUME is an award-winning journalist, author, and cultural historian. She contributes regularly to Vanity Fair, and her work has appeared in many other publications, including the New York Times, The Wall Street Journal, Vogue, Town & Country, and The Paris Review Daily. She is a New Yorker currently based in Los Angeles.

"Brimming, addictive ... in Everybody Behaves Badly, the party has just begun and the taste of fame is still ripe...the Lost Generation  [is] restored to reckless youth in living black and white." - James Wolcott, Vanity Fair

"The story behind Hemingway's The Sun Also Rises is totally captivating, smartly written, and provocative." - Glamour

"Blume's achievement is doubly remarkable. As an award-winning journalist and cultural historian, she revisits the intense nightlife of Parisian bars and cafes and the explosive, rivalrous drama of Pamplona in a chiseled, precise style that would please the master himself. By filling in Hemingway's purposeful silences and omissions with the story's real-life people and actual events, she accentuates the author's artistic genius and enlarges our understanding of the novel's complex characters and themes. This is a book for novice Hemingway readers as well as veterans of his work." - The Tampa Bay Times

"Meticulously document[ed] ... pacily written ... Ms. Blume has drawn deeply upon many sources, particularly Hemingway’s own correspondence, to deftly portray the cast of lost characters, their thin-skinned vanities and their quarrelsome insecurities." - The Wall Street Journal

"Fiendishly readable ... a deeply, almost obsessively researched biography of a book, supported by a set of superb endnotes worth reading in their own right." - Washington Post

"Masterfully told ... “Everybody Behaves Badly” is deeply evocative and perceptive, and every page has a Hemingway-like ring of unvarnished truth." - Christian Science Monitor

"[A] must-read ... In Lesley M.M. Blume's latest release, escape to the real-life world of Hemingway's groundbreaking piece of modern literature, The Sun Also Rises. The boozy, rowdy nights in Paris, the absurdities at Pamplona's Running of the Bulls and the hungover brunches of the true Lost Generation come to life in this intimate look at the lives of the author's expatriate comrades." - Harper's Bazaar

"[An] impeccably researched and resonant account of the true story behind The Sun Also Rises ... Everybody Behaves Badly breaks ground by stressing how important The Sun Also Rises was in bringing modernist literature to a commercial audience and, especially, the part Fitzgerald played in helping to encourage Hemingway and shape his manuscript." - The Financial Times

“Without sounding unduly disapproving or moralistic, Blume gives us a portrait of the artist as a young opportunist … [an] excellent book.” - The Times Literary Supplement

“My favorite book of 2016 ... a fascinating recreation of one of the most mythic periods in American literature—the one set in Paris in the ’20s—and about the writers and artists who were drawn there: Hemingway’s friends, mentors, lovers, and enemies. Everyone behaved badly indeed, Hemingway worst of all, which is one reason it’s hard to stop reading.” - Jay McInerney

"As meticulous a history of the early 20th Century as it is a true drama-fueled page-turner starring characters like F. Scott Fitzgerald, Everybody Behaves Badly ticks both beach read and academic columns." - Tory Burch Daily

"A spirited account of a spirited age, when writers saw an opportunity to change the culture ... Blume presents a sharp portrait of a young nobody desperately, sometimes maliciously, trying to become a great — if not the great — writer of his time.  Despite the wobbly tower of books about Hemingway, it seems we can’t keep from returning to him, and writers like Blume make it worth our while." - Los Angeles Review of Books

"Engrossing ... Revealing ... Drawing on journals, letters, and autobiographies of many members of the artistic circles in which Hemingway moved in the early 1920s, Blume  shows how ruthlessly Hemingway betrayed his mentors, skewered his friends in his fiction, and sought to advance his career at all costs." - Boston Globe

"A fascinating, up-close look at how Hemingway kicked off his spectacular career ... compulsively readable." - Houston Chronicle

"Thick with juicy details...[with] a fascinating epilogue ... Blume writes that the outline alone for her book ran to 1,400 pages. And every page of that labor is visible." -The Dallas Morning News

“[A] vivid character- and fact-filled book … One of the distinguishing features of Everybody Behaves Badly is just how crammed with anecdotes and facts it is — not to mention judgment and analysis. Ms. Blume has cast her net wide and dug deeply and intelligently into primary and secondary sources.  And it is precisely all this assiduousness on her part that makes this such a valuable addition to the vast literature on Hemingway, modernism, Paris in the 1920s, [and] expatriate American culture … Ms. Blume spares us none of the gory details of betrayals — literary and personal — naked ambition, ruthlessness, and all manner of nastiness that went into the making of [Hemingway’s] stunning debut.” - The Washington Times

"Everybody Behaves Badly is a page-turner of the highest order, chock-a-block with more scandal than the latest issue of Us magazine. It also offers deep insight into the paradox that is Hemingway himself ... It all makes for fascinating reading, and Blume’s style, which has been compared to Flannery O’Connor and Truman Capote, is easy and engaging." - Winnipeg Free Press

"A wonderful book." - The Chicago Tribune

"[A] revealing reconstruction of Ernest Hemingway’s revelry with friends in Pamplona, Spain, in 1925 and how it became the source of his groundbreaking modernist novel “The Sun Also Rises.” - The Sacramento Bee

"As the old saying goes, truth is stranger than fiction. And the two often intertwine, as we learn in Lesley M.M. Blume’s mesmerizing account of the young Ernest Hemingway in Paris in the 1920s as he prepares to write his breakout debut novel,The Sun Also Rises….Blume’s book is nonfiction, impeccably documented. Yet, like Hemingway’s fictional masterpiece, it reminds us that real life can inspire great stories and writing." - Book Page

"In 1925, Ernest Hemingway and five companions traveled to Pamplona for six debaucherous weeks of booze, sex, and bullfighting that inspired The Sun Also Rises. Blume uncovers the truth behind the foundational roman à clef of the Lost Generation." - Departures

"An essential book ... a page-turner.  Blume combines the best aspects of critic, biographer and storyteller ... [she] culls information and quotes from numerous sources and puts the results together with the skill of an accomplished novelist.  [It is] a complicated story, told masterfully.  Everybody Behaves Badly provides the clearest picture yet written of this critical early period in Hemingway's life." - Minneapolis Star Tribune

"EVERYBODY BEHAVES BADLY is the rollicking back story to Hemingway’s vigorous work that cut American writing to the bone….Blume’s excellent work enriches us with new research put to artful purpose.” - Buffalo News

"Richly gossipy, beautifully illustrated (with some period photographs that the reader had actually never run across before), and lavishly well written ... Blume’s full bore research is matched only by her own gift with words. Everybody Behaves Badly makes for a fine addition to the bookshelf that already contains Hemingway’s own A Moveable Feast, as well as Nancy Mitford’s Zelda, A. E. Hotchner’s Papa Hemingway, and Calvin Tompkins’ exquisite Living Well Is the Best Revenge. It is just that good." - New York Journal of Books

“The Lost Generation – in all its depression and excess – was immortalized in The Sun Also Rises. Now, cultural critic Blume pens the true story of that infamous 1925 trip to Pamploma from which Hemingway drew his inspiration, delving into the salacious travails of the group that would define an era of modern literature.” - DuJour

"Blume’s deeply researched “backstory” enhances the depth [of The Sun Also Rises] and restates its very real significance ... What happened between those two points in Hemingway’s life, from being a nobody to very much a somebody, is reconstructed with authority and insight." - Booklist, starred review

"Drawing on a rich cache of "Lost Generation" memoirs, as well as Hemingway's and his contemporaries' correspondence, the author portrays Hemingway as a ruthless egotist bent on achieving his literary ambitions, often at the expense of early supporters, including Sherwood Anderson, Gertrude Stein, and Robert McAlmon....Blume brings together in one place a wealth of information on Hemingway's first novel that will appeal to students and general readers alike." - Library Journal

Journalist Blume offers a brisk rendering of a familiar Lost Generation story featuring its most colorful protagonist... Blume's reimagining of 1920s Paris and its scandalous denizens is vivid, spirited, and absorbing. - Kirkus

“This gloriously gossipy, compulsively readable account of Hemingway’s early years in Paris with his first wife, Hadley, and the rest of the "Lost Generation," is a welcome successor to Paula McLain’s novel The Paris Wife. How did Hemingway turn the wild weeks of bullfighting in Pamplona and the alcohol-addled nights in Left Bank cafes into The Sun Also Rises? That’s the serious question at the heart of Blume’s well-researched book.” - Annalyn Swan and Mark Stevens, Pulitzer-PRIZE winning authors of DE KOONING: An American Master

“Blume’s Everybody Behaves Badly can live squarely on its own as a commentary on Hemingway’s post-war, expatriate psychology of creativity and its cost to his personal relationships.” – Signature

"A biography of a novel...Everybody Behaves Badly is itself an engrossing and varied tale: raucous and dissipated, pitiable and serious. Blume's research offers new detail to a well-studied story, and her narrative style is as entertaining as the original. Obviously required for Hemingway fans, this engaging work of nonfiction will also please a broad audience." - Shelf Awareness for Readers

Masterfully told ... “Everybody Behaves Badly” is deeply evocative and perceptive, and every page has a Hemingway-like ring of unvarnished truth. -csmonitor.com