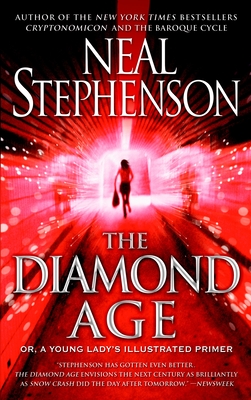 Vividly imagined, stunningly prophetic, and epic in scope, The Diamond Age is a major novel from one of the most visionary writers of our time

Decades into our future, a stone’s throw from the ancient city of Shanghai, a brilliant nanotechnologist named John Percival Hackworth has just broken the rigorous moral code of his tribe, the powerful neo-Victorians. He's made an illicit copy of a state-of-the-art interactive device called A Young Ladys Illustrated Primer  Commissioned by an eccentric duke for his grandchild, stolen for Hackworth's own daughter, the Primer’s purpose is to educate and raise a girl capable of thinking for herself. It performs its function superbly. Unfortunately for Hackworth, his smuggled copy has fallen into the wrong hands.

Young Nell and her brother Harv are thetes—members of the poor, tribeless class.  Neglected by their mother, Harv looks after Nell.  When he and his gang waylay a certain neo-Victorian—John Percival Hackworth—in the seamy streets of their neighborhood, Harv brings Nell something special: the Primer.

Following the discovery of his crime, Hackworth begins an odyssey of his own. Expelled from the neo-Victorian paradise, squeezed by agents of Protocol Enforcement on one side and a Mandarin underworld crime lord on the other, he searches for an elusive figure known as the Alchemist.  His quest and Nell’s will ultimately lead them to another seeker whose fate is bound up with the Primer—a woman who holds the key to a vast, subversive information network that is destined to decode and reprogram the future of humanity.

Neal Stephenson issues from a clan of rootless, itinerant hardscience and engineering professors (mostly Pac-10, Big 10, and Big 8 with the occasional wild strain of Ivy). He began his higher education as a physics major, then switched to geography when it appeared that this would enable him to scam more free time on his university’s mainframe computer. When he graduated and discovered, to his perplexity, that there were no jobs for inexperienced physicist-geographers, he began to look into alternative pursuits such as working on cars, unimaginably stupid agricultural labor, and writing novels. His first novel, The Big U, was published in 1984 and vanished without a trace. His second novel, Zodiac: An Eco-Thriller, came out in 1988 and quickly developed a cult following among water-pollution-control engineers. It was also enjoyed, though rarely bought, by many radical environmentalists. Snow Crash was written in the years 1988 through 1991 as the author listened to a great deal of loud, relentless, depressing music.

Mr. Stephenson now resides in a comfortable home in the western hemisphere and spends all of his time trying to retrofit an office into its generally dark, unlevel, and asbestos-laden basement so that he can attempt to write more novels. Despite the tremendous amounts of time he devotes to writing, playing with computers, listening to speed metal, Rollerblading, and pounding nails, he is a flawless husband, parent, neighbor, and all-around human being.

"[Stephenson] has gotten even better. The Diamond Age Envisions the next century as brilliantly as snow crash did the day after tomorrow."—Newsweek

"[Stephenson is] the hottest science fiction writer in America. . . . Snow Crash is without question the biggest SF novel of the 1990s. Neal's SF novel, The Diamond Age, promises more of the same. Together, they represent a new era in science fiction. People who plow through these mind-bogglers will walk around slack-jawed for days and reemerge with a radically redefined sense of reality."—Details

"Neal Stephenson is the Quentin Tarantino of postcyberpunk science fiction. . . . Having figured out how to entertain the hell out of a mass audience, Stephenson has likewise upped the form's ante with rambunctious glee."—Village Voice

"Snow Crash drew its manic energy from the cyberpunkish conceit that anything is possible in virtual reality; in The Diamond Age the wonders of cyberspace pale before the even more dazzling powers of nanotechnology."—New York Times Book Review

"Diamond Age establishes Neal Stephenson as a powerful voice for the cyber age. . . . At once whimsical, satirical, and cautionary."—USA Today

"Stephenson's world-building skills are extraordinary. . . . The Diamond Age should cement Stephenson's reputation as one of the brightest and wittiest young authors of American science fiction."—San Diego Union-Tribune