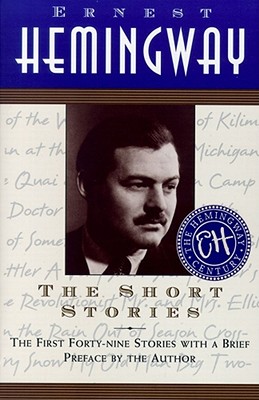 By Ernest Hemingway
$22.00
Email orders@greenlightbookstore.com for information about this item.

Ernest Hemingway is a cultural icon—an archetype of rugged masculinity, a romantic ideal of the intellectual in perpetual exile—but, to his countless readers, Hemingway remains a literary force much greater than his image. Of all of Hemingway’s canonical fictions, perhaps none demonstrate so forcefully the power of the author’s revolutionary style as his short stories. In classics like “Hills like White Elephants,” “The Butterfly in the Tank,” and “The Short Happy Life of Francis Macomber,” Hemingway shows us great literature compressed to its most potent essentials. We also see, in Hemingway’s short fiction, the tales that created the legend: these are stories of men and women in love and in war and on the hunt, stories of a lost generation born into a fractured time.

The Short Stories of Ernest Hemingway presents many of Hemingway’s most famous classics alongside rare and unpublished material: Hemingway’s early drafts and correspondence, his dazzling out-of-print essay on the art of the short story, and two marvelous examples of his earliest work—his first published story, “The Judgment of Manitou,” which Hemingway wrote when still a high school student, and a never-before-published story, written when the author was recovering from a war injury in Milan after WWI. This work offers vital insight into the artistic development of one of the twentieth century’s greatest writers. It is a perfect introduction for a new generation of Hemingway readers, and it belongs in the collection of any true Hemingway fan.

Ernest Hemingway did more to change the style of English prose than any other writer of his time. Publication of The Sun Also Rises and A Farewell to Arms immediately established Hemingway as one of the greatest literary lights of the twentieth century. His classic novel The Old Man and the Sea won the Pulitzer Prize in 1953. Hemingway was awarded the Nobel Prize for Literature in 1954. His life and accomplishments are explored in-depth in the PBS documentary film from Ken Burns and Lynn Novick, Hemingway. Known for his larger-than-life personality and his passions for bullfighting, fishing, and big-game hunting, he died in Ketchum, Idaho on July 2, 1961.