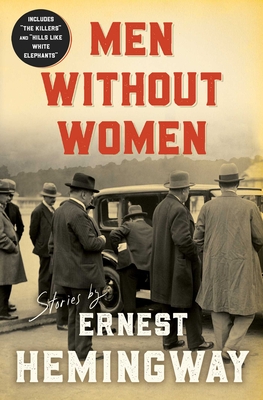 First published in 1927, Men Without Women represents some of Hemingway's most important and compelling early writing. In these fourteen stories, Hemingway begins to examine the themes that would occupy his later works: the casualties of war, the often-uneasy relationship between men and women, sport and sportsmanship. In "Banal Story," Hemingway offers a lasting tribute to the famed matador Maera. "In Another Country" tells of an Italian major recovering from war wounds as he mourns the untimely death of his wife. "The Killers" is the hard-edged story about two Chicago gunmen and their potential victim. Nick Adams makes an appearance in "Ten Indians," in which he is presumably betrayed by his Indian girlfriend, Prudence. And "Hills Like White Elephants" is a young couple's subtle, heart-wrenching discussion of abortion. Pared down, gritty, and subtly expressive, these stories show the young Hemingway emerging as America's finest short story writer.

Ernest Hemingway did more to change the style of English prose than any other writer of his time. Publication of The Sun Also Rises and A Farewell to Arms immediately established Hemingway as one of the greatest literary lights of the twentieth century. His classic novel The Old Man and the Sea won the Pulitzer Prize in 1953. Hemingway was awarded the Nobel Prize for Literature in 1954. His life and accomplishments are explored in-depth in the PBS documentary film from Ken Burns and Lynn Novick, Hemingway. Known for his larger-than-life personality and his passions for bullfighting, fishing, and big-game hunting, he died in Ketchum, Idaho on July 2, 1961.