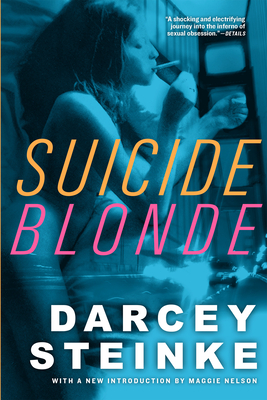 Was it the bourbon or the dye fumes that made the pink walls quiver like vaginal lips?Twenty-five years after its initial publication, Darcey Steinke's sensational Suicide Blonde has lost none of its raw charge. Jesse is a beautiful twenty-nine-year-old adrift in San Francisco's demimonde of sexually ambiguous, drug-taking outsiders, desperately trying to sustain a connection with her bisexual boyfriend Bell. She becomes caretaker and confidante to Madame Pig, a grotesque, besotted recluse. Jesse also meets Madison, Pig's daughter or lover or both, who uses others' desires for her own purposes, and who leads Jesse into a world beyond all boundaries. As startling, original, and vital as it was when first published at the height of the grunge era, Suicide Blonde is an intensely erotic story of one young woman's sexual and psychological odyssey and a modern cult classic.

Darcy Steinke is the author of five novels including Sister Golden Hair, Jesus Saves, Up Through the Water, and Milk, and a memoir, Easter Everywhere. Her books have been translated into ten languages and her nonfiction has appeared in numerous publications, including the New York Times, Washington Post, and New York Magazine. She has been both a Henry Hoyns and a Stegner Fellow, and has taught at Columbia University, Barnard, Princeton, and The New School. Maggie Nelson is a poet, critic, author of the National Book Critic's Circle Award-winning memoir The Argonauts, and the recipient of a MacArthur Fellowship. Her other works include The Art of Cruelty: A Reckoning, Bluets, The Red Parts: A Memoir, and Jane: A Murder. She teaches in the School of Critical Studies at CalArts and lives in Los Angeles, California.