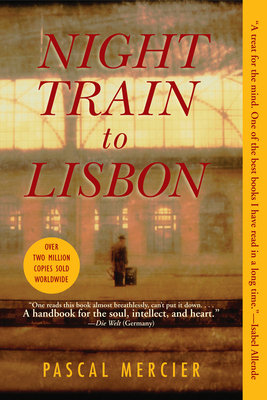 “This debut novel taps into some of the oldest veins of story, the primal ones of night journeys, of being stuck in place yet adrift and confused about life's purpose. It is full of people who have lived, even as the fullness of that is revealed only in the protagonist's drawing out of their stories. I'm not sure how much this book might teach us how to live, but it has reminded me of what it is to really read.”
— Rick Simonson, The Elliott Bay Book Company, Seattle, WA

Raimund Gregorius teaches classical languages at a Swiss lyc e, and lives a life governed by routine. One day, a chance encounter with a Portuguese woman inspires him to question his life--and leads him to an extraordinary book that will open the possibility of changing it. Inspired by the words of Amadeu de Prado, a doctor whose intelligence and magnetism left a mark on everyone who met him and whose principles led him into a confrontation with Salazar's dictatorship, Gergorius boards a train to Lisbon. As Gregorius becomes fascinated with unlocking the mystery of who Prado was, an extraordinary tale unfolds.

One of the most thoughtful and entertaining novels to come out of Europe in a decade . . . a smart, heartfelt, thoroughly enjoyable book written for thinking adults, and the most recent incarnation, from Hermann Hesse's Steppenwolf right down to Carlos Ruiz Zafon's The Shadow of the Wind, of that potent, ever-popular myththe book that changes your life. . . . Go ahead and buy this onebelieve me, you'll want to read it more than once.”Nick Dimartino, Shelf Awareness

One reads this book almost breathlessly, can’t put it down . . . A handbook for the soul, intellect and heart.”Die Welt (Germany)

A treat for the mind. One of the best books I have read in a long time.” Isabel Allende

This beautiful booklit like a fuse that snaked its way into my consciousness, sending out sparklers of light that made me feel more alive, more awake, for days. I hated to see it come to an end. What more can one ask?” Maya Muir, The Oregonian

A book so intent on answering the larger questions of existence that if readers give it a chance, it could be life-altering. A brilliant book that manages to excite the mind and the heart in equal measure.” Betsy Burton, The King’s English Bookshop, Salt Lake City, UT

Challenges the reader, both intellectually and philosophically. . . . I was hookedI read the book in no more than two sittings.” Bruce Tierney, BookPage

Might call to mind the magical realism of Jorge Amado or Gabriel Garcia Marquez . . . allusive and thought-provoking, intellectually curious and yet heartbreakingly jaded. . . . Its lyricism and aura of the mysterious only enhance the tale’s clear-sighted confrontation with the enduring questions.” Tony Lewis, The Providence Journal

Rich, dense, star-spangled . . . The novels of Robert Stone come to mind, and Elias Canetti’s Auto-da-Fe, and Thomas Mann’s Death in Venice, and Kobo Abe’s The Ruined Map, not to mention Marcus Aurelius and Wittgenstein. . . [but] what Night Train to Lisbon really suggests is Roads to Freedom, Jean-Paul Sartre’s breathless trilogy about identity-making.” John Leonard, Harper’s Magazine

Celebrates the beauty and allure of language . . . adroitly addresses concepts of sacrifice, secrets, memory, loneliness, infatuation, tyranny, and translation. It highlights how little we know about others.” Tony Miksanek, Chicago Sun-Times

The text of Amadeu’s writing is filled not with mere nuggets of wisdom but with a mother lode of insight, introspection, and an honest, self-conscious person’s illuminations of all the dark corners of his own soul. . . . Mercier has captured a time in historyone of time timeswhen men must take a stand.” Valerie Ryan, The Seattle Times

Dreamlike . . . A meditative, deliberate exploration of loneliness, language and the human condition . . . The reader is transported and, like Gregorius, better for having taken the journey.” Debra Ginsberg, The San Diego Union-Tribune

Readers will be rewarded . . . by the involving, unpredictable, and well-constructed plot and Mercier’s virtuosic orchestration of a large and memorable cast of characters. As the stories of Gregorius and de Prado draw together, this becomes a moving meditation on the defining moments in our lives, the silent explosions that change everything.” Forest Turner, Library Journal

The age-old intellectual’s dilemma, considered in a compelling blend of suspenseful narrative and discursive commentary . . . an intriguing fiction.” Kirkus Reviews

A meditative novel that builds an uncanny power through a labyrinth of memories and philosophical concepts that illuminate the narrative from within. . . . a remarkable immediacy that makes for a rare reading pleasure.” San Francisco Chronicle

The artful unspooling of Prado’s fraught life is richly detailed: full of surprises and paradoxes, it incorporates a vivid rendering of the Portuguese resistance to Salazar . . . . comes through on the enigmas of trying to live and write under fascism.” Publishers Weekly

One of the great European novels of the past few years.” Page des libraires (France)

The stuff of fine fiction . . . has the coloration and feel of Alan Lightman’s Einstein’s Dreams or Peter Handke’s Crossing the Sierra de Gredos.” The Morning News

This novel taps into some of the oldest veins of story, the primal ones of night journeys, of being stuck in place, yet adrift, and confused about life's purpose. It is full of people who have lived, even as the fullness of that is revealed only in the protagonist's drawing out of their stories. I'm not sure how much this book might teach us how to live, but it has reminded me of what it is to really read.” Rick Simonson, The Elliott Bay Book Company, Seattle, WA, Book Sense quote

As mesmerizing and dreamlike as a Wong Kar-wai film, with characters as strange and alienated as any of the filmmaker’s . . . Mercier . . . is a master at mixing ideas and plot. . . . Prado’s ruminative autobiography [is] reminiscent of Marcus Aurelius’s Meditations or Fernando Pessoa’s The Book of Disquiet. . . . unforgettable moments of crystalline, even poetic, insight.” Bookforum

A sensation. The best book of the last ten years . . . A novel of incredible clarity and beauty.” Bücher (Germany)

Powerful, serious, and brilliant . . . constitutes one of the true revelations of this season.” L’Humanité (France)

Impressive . . . a life lesson and a model of lucidity.” La Quinzaine (France)

Mercier draws together all the big existential questions in this masterful novel. . . . visionary.” Volkskrant (Netherlands)

Mercier has erected a monument to literature. And he has done it wonderfully, with the full weight of his philosophical knowledge.” La Stampa (Italy)

A novel for people with great expectations for literature . . . written with brilliance, incomparable talent and obvious artistic power, and a wide knowledge of the human nature, mind, and soul.” Berlingske Tidende (Denmark)

Taps into some of the oldest veins of story, the primal ones of night journeys, of a distant land, of being stuck in-place, and yet adrift . . . Pascal Mercier does all of this and more, masterfully, alertly, intelligently. . . . I’m not sure how much this book might teach any of us how to livethat’s for anyone to decidebut it has helped remind this reader of what it is to really read.”Rick Simonson, Elliott Bay Book CompanyContains style, narrative richness and philosophy . . . I read it in three nights. Then I was convinced to change my life.” Süddeutsche Zeitung (Germany)

A serious and beautiful book about the examined life.” Le Monde (France)

A book in which poetry and philosophy are intimately intertwined.” Tages-Anzeiger (Switzerland)

Both philosophical and spell-binding . . . a novel to absorb . . . One and a half million German readers can’t be wrong: Philosophy can go to the heart!” Politiken (Denmark)

An existentialist novel with a post-modern view of the self, a well-researched taste of the magical city Lisbon, but also a searching picture of an unusual and rarely described protagonist’s life in it’s most appalling and life-affirming phase.” Nordjyske Stiftstidende (Denmark)

Exceptional . . . a thriller of a philosophical novel. You cheat yourself by not bringing this book with you for the holiday.” Weekendavisen (Denmark)

Beautiful . . . An elegant narrative of the exploration of one human being by another. . . . throw[s] as much light as it seems possible on the inexhaustible question: What does it mean to be a human being, and to what extent can we know each otherand ourselves?” Børsen (Denmark)

You are not the same person you were before you started reading. This is very likely the biggest compliment you can give a noveland this book deserves it.” Kristeligt Dagblad (Denmark)

An intense novel, an initiation into the interior life for refined palates.” La Repubblica (Italy)