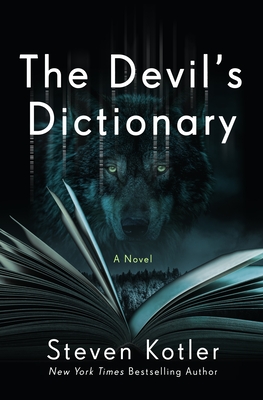 By Steven Kotler
$27.99
Email orders@greenlightbookstore.com for information about this item.

New York Times bestselling author Steven Kotler's follow up to Last Tango in Cyberspace, a near-future thriller about the evolution of empathy in the tradition of William Gibson and Neal Stephenson.

Hard to say exactly when the human species fractured. Harder to say when this new talent arrived. But Lion Zorn, protagonist of Last Tango in Cyberspace, is the first of his kind—an empathy tracker, an emotional forecaster, with a felt sense for how culture evolves and the future arrives.

In The Devil’s Dictionary, when a routine em-tracking job goes sideways and em-trackers themselves start disappearing, Lion finds himself not knowing who to trust in a life and death race to uncover the truth. And when the trail leads to the world’s first mega-linkage, a continent-wide national park advertised as the best way to stave off environmental collapse, and exotic animals unlike any on Earth start showing up—Lion’s quest for truth becomes a fight for the survival of the species.

Packed with intrigue and heart-pounding action, marked by unforgettable characters and vivid storytelling, filled with science-based brilliance and cult comic touches, The Devil’s Dictionary is Steven Kotler at his thrilling science fiction best.

STEVEN KOTLER is a New York Times bestselling author, award-winning journalist, and Founder and Executive Director of the Flow Research Collective. He is the author of over a dozen books, including The Art of Impossible, The Rise of Superman, Abundance, and Bold. His work has been translated into over 50 languages and appeared in over 100 publications, including the New York Times Magazine, Wall Street Journal, TIME, Wired, Atlantic Monthly, and Forbes.

"Filled with action and intrigue, Steven Kotler’s The Devil’s Dictionary is pure cyberpunk weirdness that both thrills and amazes." —Portland Book Review

"This fast-moving SF thriller pops with weirdness and imagination...an engrossing story that will make you both laugh and think. A richly lunatic tale of the future." —Kirkus Reviews (starred review)

"[Action-packed]...Readers with a fondness for nature will appreciate Lion and the sincerity of his quest." —Publishers Weekly

“It’s an exceptionally powerful read, with great dialogue; and, despite the tension, I still laughed out loud in multiple places. The premise of an emotion-based near-future sci-fi is also new and exciting. A clear favourite of the year for me.” —Libri Draconis

Praise for Last Tango in Cyberspace:

"Both thriller and sf, the latest from Kotler is sure to please....A fascinating read. Highly recommend." —Library Journal (starred review)

"This near-future technothriller is a breezy around-the-world romp for ex-journalist and “empathy-tracker” Lion Zorn.... a fun story with plenty of SF media references for fans to enjoy." —Publishers Weekly

"Kotler crafts an intriguing blend of detective story and social critique.... [He] creates a vivid picture of near-future earth... readers who dig in will find a story that is, at its core, an insightful view on how empathy can connect us to each other and to the living beings that share this planet." —Booklist

"Astounding! I love any book that teaches me about the future and Kotler’s Last Tango is the best I’ve read in a very long time. Incredibly insightful, wildly entertaining, and nearly impossible to put down.” —Peter Diamandis, New York Times bestselling author

“Dazzling! A luminous, diamond-bright thriller of the near future. Sparkling with empathy, packed with wit, and overflowing with catch-your-breath insights into the human condition. I wish I’d written this myself.” —Ramez Naam, Philip K Dick Award-winning author

“With a sharp cyberpunk mind and an empaths’ soul, Last Tango gives us a believable near-future and a story you won’t be able to stop reading. I inhaled in one gulp. Bravo!” —R.U. Sirius, writer, editor, talk show host, musician, and co-founder of Mondo 2000

"Some books give you a peek into what the future may hold, but Last Tango holds you down, tapes your eyes open, and blasts the doors off. More fun than used to be legal in many states.” —Joshua Klein, Hacker, Host of National Geographic’s The Link, Author, and Consultant