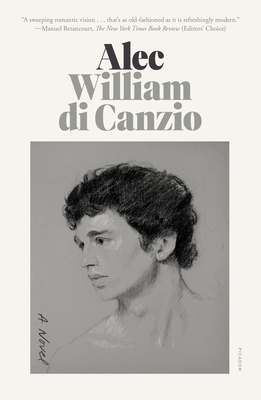 Di Canzio follows their story past the end of Maurice to the front lines of battle in World War I and beyond. Forster, who tried to write an epilogue about the future of his characters, was stymied by the radical change that the Great War brought to their world. With the hindsight of a century, di Canzio imagines a future for them and a past for Alec—a young villager possessed of remarkable passion and self-knowledge.

Alec continues Forster’s project of telling stories that are part of “a great unrecorded history.” Di Canzio’s debut novel is a love story of epic proportions, at once classic and boldly new.

William di Canzio’s plays--including the award-winning Dooley and Johnny Has Gone for a Soldier--have been staged in New York, Los Angeles, San Diego, and Philadelphia; at Yale University and the O’Neill Theater Center; and at the National Constitution Center. Di Canzio has taught literature and writing at Smith College, Haverford College, and Yale University. Since 2013, he has taught in the Pennoni Honors College of Drexel University.

"There’s a sweeping romantic vision here that’s as old-fashioned as it is refreshingly modern, with this war-torn couple pining away for each other as they hold their love in the highest esteem, in bold defiance of English laws and customs . . . Di Canzio’s novel reads like an attempt to make these forgotten men feel less alone, to proliferate their stories . . . Alec is fiction as queer archaeology, demonstrating that looking back doesn’t necessarily mean looking backward."—Manuel Betancourt, The New York Times Book Review

"Alec is the kind of novel Maurice could never be, full of sex and war, death and torture. Di Canzio’s descriptions of their experiences are harrowing, tender, brutal, and comic . . . The question Maurice raised—is there anywhere these men can truly be together?—is made the more real, not the less, by the war and this novel." —Alexander Chee, The New Republic

"Just when it began to seem that I couldn’t read E. M. Forster’s Maurice one more time, as much as I love it, here’s Alec, William di Canzio’s brilliant reimagining of Forster’s classic. Alec extends Maurice, delivers it to us intact but refreshed and reconsidered. I, for one, am extremely grateful.” —Michael Cunningham, author of The Hours

"The classic love story of upperclass Englishman Maurice Hill and gamekeeper Alec Scudder comes alive again in this inspired reimagining of E. M. Forster’s novel Maurice. Although told this time from Alec’s point of view, the new novel successfully captures the spirit of Forster’s original. . .the love story itself remains timeless, and its seamless reimagining is an altogether memorable accomplishment. One imagines Forster would be pleased." —Booklist (starred review)

"Playwright Di Canzio’s canny debut retells E.M. Forster’s pioneering gay classic, Maurice, from the point of view of the gamekeeper who ends up with the title character. . . Di Canzio liberally quotes dialogue from Forster’s novel for dozens of pages, creating a satisfying blend of fan fiction and intertextuality. The romance and the wartime scenes are particularly well rendered, as is a postwar episode featuring Alec in Cassis." —Publishers Weekly

"Heartfelt, sexy, and luminously written, DiCanzio’s novel conjures the Forsterian spirit to bring Alec and Maurice into the modern world. The deft interweaving of queer history, queer fiction, queer biography and sheer imagination kept me thinking and open to surprise. I loved it." —Wendy Moffat, author of A Great Unrecorded History: a New Life of E.M. Forster

"Maurice and Alec are one of literature's iconic couples. It's been more than a century since Forster first let these lovers into the world, and what a treat to return to them now, in di Canzio's moving homage, where we find our boys still offering valuable lessons, still tender and troubled and courageous enough to love." —Justin Torres, author of We the Animals