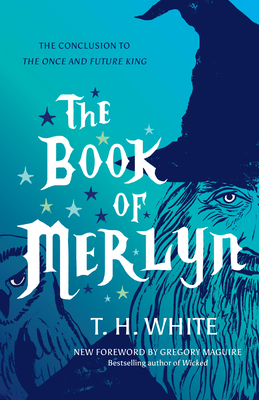 This magical account of King Arthur’s last night on earth, rediscovered in a collection of T. H. White’s papers at the Harry Ransom Center at the University of Texas at Austin, spent twenty-six weeks on the New York Times bestseller list following its publication in 1977. While preparing for his final, fatal battle with his bastard son, Mordred, Arthur returns to the Animal Council with Merlyn, where the deliberations center on ways to abolish war. More self-revealing than any other of White’s books, Merlyn shows his mind at work as he agonized over whether to join the fight against Nazi Germany while penning the epic that would become The Once and Future King. The Book of Merlyn has been cited as a major influence by such illustrious writers as Kazuo Ishiguro, J. K. Rowling, Helen Macdonald, Neil Gaiman, and Lev Grossman.

“Arriving from beyond the curve of time and apparently from the grave, The Book of Merlyn stirs its own pages, saying, wait: you didn’t get the whole story. . . . It gives us a final glimpse of those two immortal characters, Wart and Merlyn, up close, slo-mo, with a considered and affectionate scrutiny. The book is an elegiac posting from a master storyteller of the twentieth century. Its reissue in our next century is just as welcome as when it first arrived forty years ago. . . . Certainly the moral questions about the military use of force perplex the world still. . . . The efficacy of treaties, the trading of insults among the potentates of the day, the testing of weapons, the weaponizing of trade—these strategies are still front and center. Rather terrifyingly so. We do well to revisit what that old schoolteacher of children, Merlyn, has been trying to point out to us about power and responsibility.”
—Gregory Maguire, from the foreword