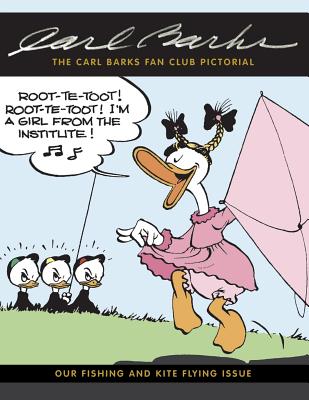 This is the ninth volume in the ongoing series of Carl Barks Fan Club Pictorials published quarterly for Members of the International Carl Barks Fan Club, and worldwide fans of the Carl Barks stories of Donald Duck and his nephews, Uncle Scrooge (the world's wealthiest duck), and the many other denizens of Duckburg, Calisota, USA. Created by the world famous cartoonist, Carl Barks, the CBFC Pictorial series features informative, educational and entertaining examples of the comic book works of the late Mr. Barks, which were produced over a career spanning more than two decades, followed by nearly forty years of painting scenes in oils, featuring the characters who appeared in his comic book stories. This is THE fanzine for fans of Disney characters, comic book collectors, scholars and intellectuals who appreciate the delightfully frenetic stories and art of Carl Barks.

He was known as "The best gag man in the business" at Walt Disney's animation studio in California. But health problems caused CARL BARKS to resign from the Studio, and subsequently he took up writing and drawing comic book tales about Donald Duck and other Disney characters, many of whom became principals in Disney animated cartoons for theater and television audiences. Mr. Barks lived for nearly 100 years, and shortly before his passing he and Roy Disney Jr. authorized formation of the nonprofit international Carl Barks Fan Club, the purpose of which is to help preserve the Carl Barks legacy of stories and art for future generations, and to promote that legacy to an ever-widening global audience.