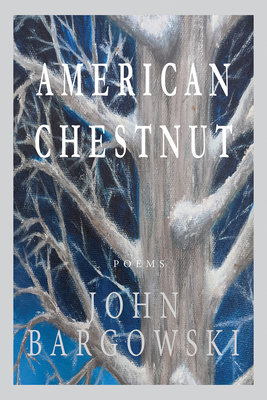 In American Chestnut, his latest volume of poems, John Bargowski has moved on from where he was a decade ago in Driving West on the Pulaski Skyway. This time, he’s pushed out from those powerful cityscapes he gave us then to include a whole slice of rural life, returning to the farmscapes of his grandfather’s world. There’s still that familiar elegiac strain in his work, this time linked to the lost world of American chestnuts, where only the stubborn roots of the exposed trunk remain, buried under the butchered remains of cattle and the raucous cry of crows. And yet what incredible vitality and wit one finds in the images and music this New Jersey poet—like William Carlos Williams and Allen Ginsberg and Robert Pinsky, among others—has rendered in the idiom of the modern post-impressionist he is: Bob Wills and the Texas Playboys, a reincarnation of Emily Dickinson and her Post–Modern-Neo-Punk-Ska Band Playing for Change in Terminal C of the Staten Island Ferry, or that terrifying music his four-year-old daughter hears at the entrance to the Shark Tunnel at Adventure Aquarium, Camden. And so much more!

JOHN BARGOWSKI’S was born and raised in a blue collar neighborhood along the Palisades of Jersey City overlooking the Manhattan skyline. He then moved to raise his family on a small acreage along the Delaware River in the Skylands of northwestern New Jersey. He is the recipient of a 2009 National Endowment for the Arts Fellowship in Creative Writing, a New Jersey State Council on the Arts Distinguished Artist Fellowship, The Rose Lefcowitz Prize from Poet Lore, and the Theodore Roethke Prize from David Wagoner at Poetry Northwest. His first book Driving West on the Pulaski Skyway was selected by Paul Mariani for the Bordighera Prize and published in an Italian - English Edition in 2012. Several of his poems have been nominated for the Pushcart Prize. His work has been published on the Poetry Daily website, and in Poetry, Ploughshares, New Ohio Review, Alaska Quarterly Review, The Gettysburg Review, Poet Lore, Southern Poetry Review, Tar River Poetry, Poetry East, Prairie Schooner, & Journal of New Jersey Poets, among others.