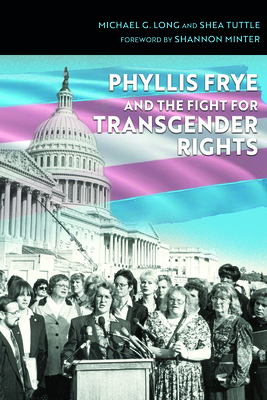 The first openly transgender judge to be appointed in the United States, the first attorney to obtain corrected birth certificates for transgender people who had not undergone gender confirmation surgery, a survivor of conversion therapy, and author of a law review article that helped thousands of employers adopt supportive policies for their workers, Phyllis Frye is truly a pioneer in the fight for transgender rights.

Based on interviews with Frye, Phyllis Frye and the Fight for Transgender Rights covers her early life, the discrimination she faced while struggling with her identity—including being discharged from the army and fired from a subsequent job at her alma mater, Texas A&M—her transition in 1976, her many years of activism, and her current position as an associate judge for the municipal courts of Houston.

This gripping account of Frye’s efforts to establish and protect the constitutional rights of transgender individuals not only fills a gap in existing histories of LGBTQ+ activism but will also inform and instruct contemporary trans activists.

MICHAEL G. LONG is the author or editor of numerous books on civil rights, religion, and politics, including We the Resistance: Documenting Our History of Nonviolent Protest; Gay Is Good: The Life and Letters of Gay Rights Pioneer Franklin Kameny; and Martin Luther King, Jr., Homosexuality, and the Early Gay Rights Movement. SHEA TUTTLE is the author of Exactly as You Are: The Life and Faith of Mister Rogers and coeditor of Can I Get a Witness? Thirteen Peacemakers, Community Builders, and Agitators for Faith and Justice.

“Inspirational and triumphant! Every young or fledgling activist from any marginalized community can absorb and take to heart the empowering history documented here. Phyllis Fyre's lessons are universal.”—Jamison Green, author of Becoming a Visible Man and Navigating Trans*+ and Complex Gender Identities
— Jamison Green

“Over the past decade the fight for transgender rights has emerged as a core issues in the global fight for gender and sexual equality. Phyllis Frye and the Fight for Transgender Rights is a vibrant, moving portrait and celebration of a pioneer of that movement. It is also a vivid account, documented for the first time, of the early years of that movement. Michael G. Long and Shea Tuttle’s work here – as timely as it is invaluable – beautifully illuminates how the quest for freedom and justice for transgender people is at the heart of liberation for all of us.”—Michael Bronski, author of A Queer History of the United States
— Michael Bronski

“This is the story of an extraordinary individual who, against all odds, forged a nationwide movement for transgender equality. Every time a door slammed shut, Phyllis R. Frye fought back, not just for herself, but for the freedom of all people to live unconstrained by gender stereotypes. From defeating Houston’s law against cross-dressing to inspiring the visionary International Bill of Gender Rights to mentoring new generations of transgender lawyers, Phyllis Frye is the undisputed mother of the transgender rights movement in the United States. In this deeply researched and inspiring book, Michael G. Long and Shea Tuttle capture the essence of Phyllis R. Frye.”—Paisley Currah, author of Sex is as Sex Does: Governing Transgender Identity
— Paisley Currah

“More than just a biography on the first openly transgender judge, Phyllis Frye and the Fight for Transgender Rights is a testament to the ability of a single persistent person to change an unrelenting world for the better.”—Foreword Reviews
— Foreword Reviews