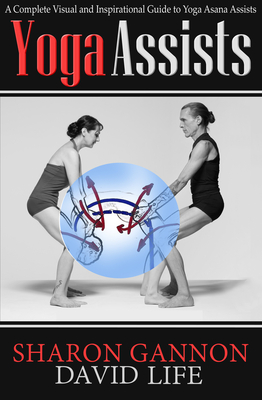 In this book, world-renowned Jivamukti Yoga practitioners Sharon Gannon and David Life use the word assist to communicate the idea that in yoga there are actually two beings interacting together on various levels of consciousness to foster a decrease in avidya, mis-knowing, and an increase in vidya, or the knowing principle. A yoga assist, then, is action taken in a microcosmic relationship that reveals macrocosmic truths. It is action undertaken in mutuality with the best of intentions and the blessing of the teacher's teachers. The giving of yoga is an art. Yoga assists are not static; they comprise a flowing dance of body, breath, and energy. They are based on continuous focus and awareness of the relationship between partners in the process. It takes two to tango As in tango, in each encounter between yoga student and teacher, there is an equation of reciprocity. Whether we receive or give an assist is an active process in the resolution of a relationship, a transmission, a dance. In this sense, the relationship between teacher and student is a microcosm of the flowing interrelation among all people, all species, all living beings. Through this book, with the "assistance" of Sharon and David, practitioners will deepen their understanding of the fundamental principles of yoga assists and apply them in practice and in service to others. Sharon Gannon is a twenty-first-century Renaissance woman who excels in many spiritual, artistic, and social mediums. She is best known for creating, along with David Life, the Jivamukti Yoga Method-a path to enlightenment through compassion for all beings. A student of Brahmananda Sarasvati, Swami Nirmalananda, and K. Pattabhi Jois, she is a pioneer in teaching yoga as spiritual activism and is credited for making yoga cool and hip-relating the ancient teachings of yoga to the modern world. Gannon is a musician and is a featured vocalist on many albums, including Sharanam, her solo work. She has produced numerous yoga-related DVDs and is the author of several books, including Jivamukti Yoga, The Art of Yoga, Cats and Dogs Are People Too , and Yoga and Vegetarianism. Her writing has appeared in numerous publications, including Toward 2012, Arcana V: Music, Magic and Mysticism, What Comes after Money, Semiotexte, Yoga Journal, and Origin. She writes a monthly essay called the Focus of the Month. She resides in a one-hundred-twenty-five-acre wild forest sanctuary in upstate New York. David Life was born on the 1980 summer solstice in New York City after living for thirty years with a different identity. He has a university degree in fine arts and became an influential performer, artist, and spokesperson in the political and social foment and lively arts community in the 1980s on the Lower East Side of New York City. In New York, he created Life Caf -an artists' and poets' space featured in Newsweek, various international arts and literary magazines, and in the Broadway play Rent as the setting for "La Vie Boheme." Near Life Caf , on Avenue B, the Jivamukti Yoga Society was the first of many yoga schools that he and Sharon Gannon created since 1986, with the current amazing school and caf located on Broadway, and a one-hundred-twenty-fve-acre wild sanctuary and ashram in the mountains of upstate New York. Together with Sharon Gannon, and through the blessings of his gurus Shri Brahmananda Sarasvati, Shri Swami Nirmalananda, and Shri K. Pattabhi Jois, Life has participated in the creation of Jivamukti Yoga. He has taught Jivamukti Yoga throughout the world since his first trip to India in 1986.