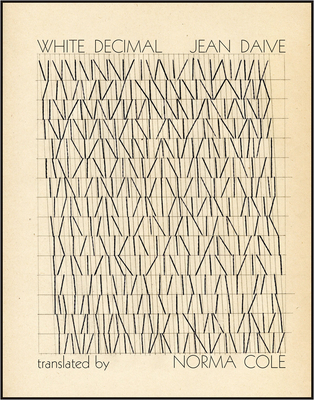 “The publication of Décimale blanche in 1967 marked a major shift in French poetry, introducing an entirely new sensibility. Fifty years later, Norma Cole’s superb new translation is no less exciting. Not only is it a masterful rendition of this classic, capturing all its spare force and uncanny grace, but it also stands in its own right as an important contribution to American poetry. White Decimal is a striking literary event, and an extremely beautiful one.” —Cole Swensen, author of Noise That Stays Noise

JEAN DAIVE (1941) is a French poet and translator. He is the author of novels, collections of poetry and has translated work by Paul Celan and Robert Creeley among others. He has edited encyclopedias, worked as a radio journalist and producer with France Culture, and has edited four magazines: fragment (1970–73), fig. (1989–91), FIN (1999–2006) and K.O.S.H.K.O.N.O.N.G. (from 2013 to the present). Publishing since the 1960s, Daive is known as one of the important French avant-garde poets. Also a photographer, Daive chairs the Centre international de poésie de Marseille. NORMA COLE’s books of poetry include Win These Posters and Other Unrelated Prizes Inside, Where Shadows Will: Selected Poems 1988—2008, Spinoza in Her Youth and Natural Light, and most recently Actualities, her collaboration with painter Marina Adams. TO BE AT MUSIC: Essays & Talks made its appearance in 2010 from Omnidawn Press. Her translations from the French include Danielle Collobert’s It Then, Collobert’s Journals, Crosscut Universe: Writing on Writing from France (edited and translated by Cole), and Jean Daive’s A Woman with Several Lives. She lives in San Francisco.