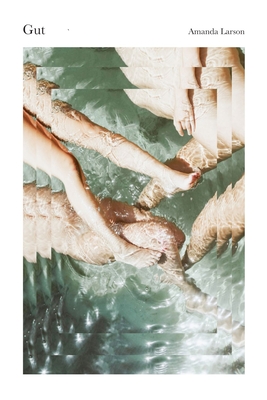 These poems follow the aftermath of and recovery from trauma.

Amanda Larson’s Gut begins with an epigraph from Frank O’Hara: “Pain always produces logic, which is very bad for you.” From there, Larson launches an unflinching interrogation of how a young woman maintains agency in the wake of trauma, violence, and desire. Larson spins a conversation between works of feminist theory—including the those of Cathy Caruth, Susan Bordo, Patricia Hill Collins, Anne Carson, Hélène Cixous, and bell hooks—and her own experiences. The book moves through Larson’s recovery while questioning the limits of the very term and of language as a whole. She employs a variety of different forms, including prose, Q&A poems, and a timeline, reflecting both the speaker’s obsession with control and her growing willingness to let it go. With a measured voice, Larson finds a path for how to move beyond logic during processes of trauma and recovery.

Amanda Larson is a writer from New Jersey, and she is currently an MFA Candidate in Poetry at New York University. Her writing has appeared in the Michigan Quarterly Review, Washington Square Review, and other publications.

“Gut is a daring book of poetry that reminds us of Plato’s arguments. Larson follows thought, reason, and logic to show that none of these make sense of assault or abuse: ‘Before those things happened to me, I had been trying to argue my way out.’ And yet, this is not one of the philosopher’s dialogues. This is poetry that takes risks in form and content such that everything about it is unexpected. The plain-spoken nature of Larson’s admissions here are buoyed by her unflinching commitment to craft in sentences, in lines, and in Q&As. But be warned: this is not an easy read. It is, instead, a necessary read. I find much of the work here frightening. And I find that because the truth will scare us. This is a stunning debut.”
— Jericho Brown, judge of the Omnidawn 1st/2nd Book Contest and author of The Tradition

“Larson’s Gut is a tremendous poetry book. Sharp and precise, this collection—which is both essay and poem, self-elegy and self-interrogation—highlights the epistemological anxiety of the mind after trauma. Memory serves as a lens through which the self and desire are scrutinized and mourned; at the center of this formally inventive debut is the body, which, once violated, guts open consciousness, and creates an excruciating, slippery unraveling. Larson’s poems are an attempt to revisit, reorder, and restore something psychologically intricate and painful. The result is a beautiful, moving, and singular debut. Gut announces a surprising, cerebral, and essential new poetic voice.”
— Aria Aber, author of Hard Damage

“Larson’s debut collection, Gut, is more than a dazzling rejection of silence or the yield on some annihilating trauma, but frankly a revelatory performance of a rapacious intellect in consort with a body that values more than what the world can offer. Such palpable and vulnerable language is the aftermath of courage and beauty and open dreams.”
— Major Jackson, author of The Absurd Man

“I would pay attention to Larson. She's the real deal.”
— Alex Dimitrov, author of Love and Other Poems

“Imagine the story of a sexual trauma told solely by what happened to its victim afterward -- not physically but philosophically. It sounds improbable, but although the speaker never depicts or describes the violence, and refuses to aestheticize it, she isn't being coy; she's merely telling the story in a way that makes the perpetrator irrelevant. Read this book and watch its so-called victim become powerful.”
— Sarah Manguso, author of Ongoingness/ 300 Arguments