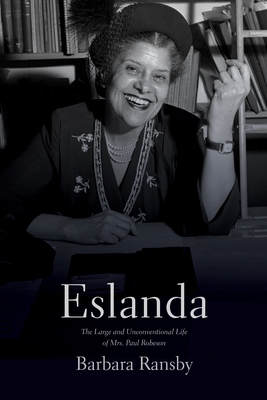 An illuminating biography of the bold, principled, and fiercely independent woman who defied convention to make her own mark on the world.

Eslanda Essie Cardozo Goode Robeson lived a colorful and amazing life. Her career and commitments took her many places: colonial Africa in 1936, the front lines of the Spanish Civil War, the founding meeting of the United Nations, Nazi-occupied Berlin, Stalin's Russia, and China two months after Mao's revolution. She was a woman of unusual accomplishment--an anthropologist, a prolific journalist, a tireless advocate of women's rights, an outspoken anti-colonial and antiracist activist, and an internationally sought-after speaker. Yet historians for the most part have confined Essie to the role of Mrs. Paul Robeson, a wife hidden in the large shadow cast by her famous husband. In this masterful book, biographer Barbara Ransby refocuses attention on Essie, one of the most important and fascinating Black women of the twentieth century.

Dr. Barbara Ransby is the John D. MacArthur Chair, and Distinguished Professor, in the Departments of African American Studies, Gender and Women's Studies, and History at the University of Illinois at Chicago (UIC). She also directs the campus-wide Social Justice Initiative, a project that promotes connections between academics and community organizers doing work on social justice. She is a graduate of Columbia University and the University of Michigan, where she was a Mellon Fellow. Dr. Ransby is the author of Ella Baker and the Black Freedom Movement: A Radical Democratic Vision and Making All Black Lives Matter: Re-imagining Freedom in the 21st Century. She is also editor in chief of Souls: a critical journal of Black politics, culture and society, and is a member of the editorial working group of the London-based journal, Race and Class, and the Editorial Advisory Board of the "Justice, Politics and Power" book series at University of North Carolina Press. She served as President of the National Women's Studies Association from 2016 - to 2018. Dr. Ransby is not only a historian and writer but also a longtime activist.