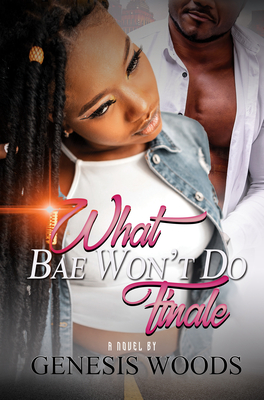 Get wrapped up in the drama with author Genesis Woods to find out what happens in the final installment of the What Bae Won't Due saga...

What happens when the relationship you thought was right ends up being so wrong? JaNair never imagined that her world would come crashing down the way it did at the grand opening of her boyfriend's nightclub. The secrets that were revealed about Jerome in front of her family and friends embarrassed her so much that she hopped on the first flight out of Los Angeles. Her destination: Houston,Texas. The decision to head to the Lone Star state wasn't a hard one for JaNair, especially with the open invitation one up-and-coming music producer gave her before he left.

When Semaj decided to move to Houston to further his career in the music industry, he also thought he'd be able to use the distance to get over JaNair. She chose who she wanted to be with, so it was time for him to move on, right? After producing a few tracks for some of H-Town's finest rappers, Semaj's popularity skyrockets, which means more money, more exposure, and more women. He appreciates all the love his newfound celebrity brings, but there's still something missing from his life. When Semaj receives a phone call from JaNair needing a place to crash for a while, he doesn't know if he'll be able to suppress the feelings he's been trying to move past.

The whole gang is back in this final installment of the What Bae Won't Do series for one last ride. Will everyone get their happily ever after, or will their love lives stay in shambles?

Born in Detroit and raised in Long Beach, CA, Genesis Woods got into trouble because of her overactive imagination. When she wasn't outside causing havoc, she was in her room reading, writing, or drawing. Her dreams of becoming a writer became reality in December 2014, when she self-published her five-star debut novel, All or Nothing: Truly Loving Destiny. Woods currently resides in Los Angeles with her two beautiful daughters. She is also the author of Black Love, White Lies 2; The Black Widow Clique; and Love, Lies, and Consequences.