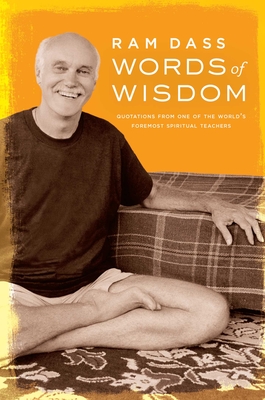 Words of Wisdom is a distillation of the last five decades of Ram Dass’s life containing the most powerful quotes from his most resonant core teachings.

Ram Dass always had a knack for heart-to-heart transmission. Far before he had a vocabulary to describe his spiritual experiences, he was Richard Alpert, a Harvard professor and early experimenter with psychedelics. After these early soul-expanding journeys, he spoke and wrote about his transcendent experiences with the innate, intuitive understanding of a true inner-voyager.

Even before Alpert realized that psychedelics weren't the final answer to enlightenment, he was more interested in cultivating a shared heart space with his patients and friends than he was in the clinical, scientific side of psychedelia.

Words of Wisdom is a distillation of hundreds of lectures and many hours of audio and video recordings from the last five decades—his core essential teachings.

Ram Dass influenced the world by teaching the path of the heart and social consciousness. He became a pivotal influence in our culture with the publication of “Be Here Now” – which has become a meaningful mantra in people’s lives over the last five decades.