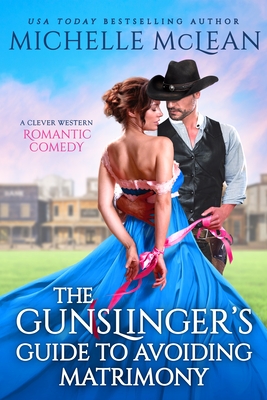 This is book number 2 in the Gunslinger series.

At the ripe old age of twenty-eight, desperate-to-retire gunslinger Adam Brady has exactly two rules. And one of them is never, ever get married. So he’ll be danged when his dreams of permanently avoiding the bounty hunter on his tail in Desolation, the only town where notorious men like him can find respite, comes with one helluva string attached. The town has a new rule: gunslingers welcome—if they get a job…or marry.

Without realizing it, Adam stumbles into a big town wedding and accidentally marries Nora Schumacher, a sassy-mouthed mountain of a woman with legs as long as his wanted poster. So what’s a gunslinger to do but get himself unhitched and find a job. Any job. Except Adam keeps getting fired, one odd circumstance after another. And he’s running out of options.

Desolation was supposed to be his safe haven. Except, he’s not only running from his past but from the irresistible woman he married. And worse, he’s finding that he rather likes the enticing, if damnably independent, wife of his. But some men just aren’t the marrying kind. Only, if he leaves, his own life won’t be worth living. If he stays, he puts the lives of his newfound family and the woman he loves on the line. So much for Desolation being the answer to all his problems.

Michelle McLean is a jeans and t-shirt kind of girl who is addicted to chocolate and goldfish crackers and spent most of her formative years with her nose in a book. She has a B.S. in History, a M.A. in English, and loves her romance with a touch of suspenseful mystery. She resides in PA with her husband and two amazing children. https://michellemcleanbooks.com/