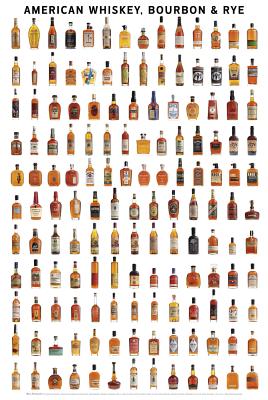 By Clay Risen
$24.95
Available at our distributor; usually ships in 1-5 days

When American Whiskey, Bourbon & Rye was published in 2013 and revised and expanded in 2015, it immediately became the bible for whiskey lovers. Now in its tenth printing, AWBAR continues to ride the American whiskey boom by rating and describing the hundreds of offering in today's marketplace. This new 24 x 36 inch wall poster features the 147 top picks by expert Clay Risen for the newbie and experienced spirits lover alike. From the rare and the expensive to the best value ryes, bourbons, and American single malts, this full-color wall poster is a celebration of the nation's favorite spirits. Risen Recommends!

Clay Risen is a senior editor at The New York Times. He is the author of the best-selling spirits book American Whiskey Bourbon & Rye: A Guide to the Nation's Favorite Spirit and has written for Smithsonian, The Atlantic, The Washington Post, and Fortune, among others.

“A comprehensive and opinionated guide for the intermediate tippler . . . It’s a detailed, admirably cranky directory. Risen’s tasting notes for each are erudite and fun.” —Wall Street Journal

“Risen is something of a Renaissance man . . . a Leonardo da Vinci of whiskey. American Whiskey, Bourbon & Rye . . . should have a proud place on the bookshelf (or by the bar) of anyone who is an enthusiast of bourbon and other American whiskeys. Very useful for shopping purposes . . . Bring this book with you.” —Los Angeles Review of Books

“Risen delicately walks readers into whiskey’s past, present, and future . . . . His words are meant for whiskey lovers, as he dissects every brand’s story and scores products on an NR (not recommended) to four-star scale. An American whiskey treasure worthy of four stars.” —Whiskey Advocate

“A whiskey novice’s best friend . . . It’s a book I plan on keeping around for constant reference.” —Saveur