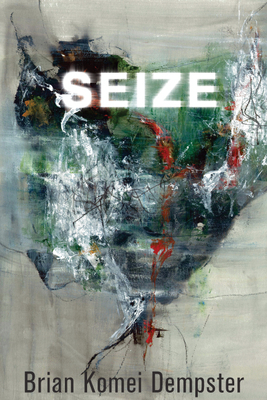 Seize, Brian Komei Dempster’s follow-up to Topaz, spares no one the highs and lows of fatherhood. The speaker struggles to care for his young and ailing child — a child whose many medical problems create an obstacle course of moral and emotional dilemmas. How does a father come to terms with the large and unknowable mysteries of a child who cannot communicate in a “normative” way? How does a parent — especially one who is dependent on language — guide a child without the use of speech? And how does one become the parent of another when their own uncertainties, their own wounds — intergenerationally from war, from strained race relations, from constantly being denied a place to belong — are still healing?

Brian Komei Dempster is an award-winning poet, editor, and teacher. His volumes of poetry, Seize (Four Way Books, 2020) and Topaz (Four Way Books, 2013), have received several honors, including the Julie Suk Award, an NCPA Gold Award in Poetry, and a Human Relations Indie Book Silver Winner award. He is the editor of From Our Side of the Fence: Growing Up in America’s Concentration Camps (Kearny Street Workshop, 2001), which received a Nisei Voices Award from the National Japanese American Historical Society, and Making Home from War: Stories of Japanese American Exile and Resettlement (Heyday, 2011). Dempster is a professor of rhetoric and language and Director of Administration for the Master’s in Asia Pacific Studies program at the University of San Francisco, where he was a recipient of the Distinguished Teaching Award. In addition, he teaches for the Colrain Poetry Manuscript Conference.

“Brian Komei Dempster’s central subject—his son’s epilepsy—could not be more freighted with risk, and yet Seize achieves a pitch-perfect harmony of lament and praise, suffering and solace. At its heart is the child Brendan—‘his head, a sunflower / too heavy / on its stem’—and a father’s searingly honest account of what it means to love him, ‘A gold knot / of shadow and light.’ This is a stunning, heartbreaker of a book.”
—Patrick Phillips

“The human body, simultaneously an instance of a promise and the site of trauma and a promise broken, is the boundless occasion of these rich and engaging poems. I love most about them the music of thinking in images, how it encompasses feeling and singing, ranging from the raw and open to the exquisite and philosophical. There is so much yearning in these poems, and so much rejoicing, and wondering out loud about the meaning of our time on earth, especially in the face of pain and suffering.”
—Li-Young Lee

"Seize is a beautiful book, symphonic in its music, intimate in its rendering of human flaws, and heroic in its attempts to portray a father and son reaching out to each other across the boundaries of their understanding."
— Pat Matsueda