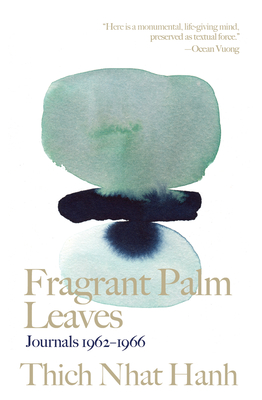 By Thich Nhat Hanh, His Holiness The Dalai Lama (Foreword by)
$18.95

Regarded by many as Thich Nhat Hanh's most personally revealing and endearing book, these collected journals chronicle the first-hand experiences of the Zen Master as a young man in both the United States and Vietnam, just as his home country is plunged into war and turmoil.

"It isn't likely that this collection of journal entries, which I'm calling Fragrant Palm Leaves, will pass the censors... I'll leave Vietnam tomorrow." Thus Thich Nhat Hanh begins his May 11, 1966 journal entry. After leaving Vietnam, he was exiled for calling for peace, and was unable to visit his homeland again until 2004. In the interim, Thich Nhat Hanh continued to practice and teach in the United States and Europe, and became one of the world's most respected spiritual leaders.

But when these journals are written, all of that is still to come. Fragrant Palm Leaves reveals a vulnerable and questioning young man, a student and teaching assistant at Princeton and Columbia Universities from 1962-1963, homesick and reflecting on the many difficulties he and his fellow monks faced at home trying to make Buddhism relevant to the people's needs. We also follow Thich Nhat Hanh as he returns to Vietnam in 1964, and helps establish the movement known as Engaged Buddhism.

A rare window into the early life of a spiritual icon, Fragrant Palm Leaves provides a model of how to live fully, with awareness, during a time of change and upheaval.

Thich Nhat Hanh was a world-renowned spiritual teacher and peace activist. Born in Vietnam in 1926, he became a Zen Buddhist monk at the age of sixteen. Over seven decades of teaching, he published more than 100 books, which have sold more than four million copies in the United States alone. Exiled from Vietnam in 1966 for promoting peace, his teachings on Buddhism as a path to social and political transformation are responsible for bringing the mindfulness movement to Western culture. He established the international Plum Village Community of Engaged Buddhism in France, now the largest Buddhist monastery in Europe and the heart of a growing community of mindfulness practice centers around the world. He passed away in 2022 at the age of 95 at his root temple, Tu Hieu, in Hue, Vietnam.

“The monk who taught the world mindfulness.”
—TIME

“Thich Nhat Hanh shows us the connection between personal inner peace and peace on earth.”
—His Holiness the Dalai Lama

“Thich Nhat Hanh is a holy man, for he is humble and devout. He is a scholar of immense intellectual capacity. His ideas for peace, if applied, would build a monument to ecumenism, to world brotherhood, to humanity.”
—Dr. Martin Luther King, Jr.

“Thich Nhat Hanh’s work, on and off the page, has proven to be the antidote to our modern pain and sorrows. Here is a monumental, life-giving mind, preserved as textual force. And that's what I feel reading and practicing his teachings: that I am being acted on by a compassion equal to and pervasive as gravity itself. His books help me be more human, more me than I was before.”
—Ocean Vuong, author of On Earth We’re Briefly Gorgeous

“One of the sweetest and most personally revealing of Thich Nhat Hanh’s books, it shows the planting of his seeds of remarkable wisdom.”
—Jack Kornfield, author of A Path With Heart

“Enlightening…To read his thoughts is to understand the connection between public life and private life, and that such ‘interbeing’ makes for ecstatic joy.”
—Maxine Hong Kingston, author of The Woman Warrior

“Thich Nhat Hanh is a great teacher. I have studied him, his work, his passage through life, with gratitude and joy. Through his writings, his public offerings, his insights, I’ve gained vision and clarity; I’ve often felt it would be impossible to find a more lucid, determined, and courageous soul.”
—Alice Walker, author of The Color Purple

“Thich Nhat Hanh is among the most revered leaders in the world. His teachings and mindfulness practices have deeply influenced my journey through life. He is a torch of wisdom lighting the path ahead, generating the compassion, love, and understanding we need to create peace for ourselves and the world.”
—Marc Benioff, chair and CEO, Salesforce

“Thich Nhat Hanh's words are like water. Simple, pure, transparent, and absolutely indispensable for life.”
—Alejandro Iñárritu, director of Birdman and The Revenant

“How is it that a Vietnamese Buddhist monk who teaches mindfulness could inspire Martin Luther King and become one of the great nonviolent activists of the twenty-first century? Like no other teacher, Thich Nhat Hanh shows us the revolutionary possibilities of building social movements based on compassion, for both ourselves and others.”
—Professor john a powell, director of the Othering & Belonging Institute at UC Berkeley

“I first met Thich Nhat Hanh in 1968 in Paris. That was the time of rising counter culture, protest against the Vietnam war and student uprising. At that time his presence in Paris was like a soothing rain in dry heat. Ever since, for more than fifty years, he has been the conscience of humanity. He has been a compassionate catalyst of spiritual awakening, social harmony and ecological awareness. He has nurtured the human spirit with dedication, determination and delight. He is humble and gentle yet powerfully persuasive and strong willed. It has been a joy of my life to know him and follow his teachings.”
—Satish Kumar, editor emeritus Resurgence & Ecologist magazine and founder of Schumacher College

“One of the greatest teachers of our time…In Fragrant Palm Leaves, the venerable poet emerges poignantly disclosing the essence of enlightenment, and also life itself!”
—Robert Thurman, author of Inner Revolution